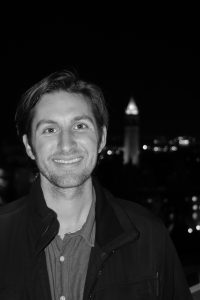 William Callison is a doctoral candidate in Political Science with a Designated Emphasis in Critical Theory at UC Berkeley. He received an M.A. in Political Science from UC Berkeley, an M.A. in Philosophy from Humboldt University in Berlin, and a B.A. with high honors in Political and Social Thought from the University of Virginia. In 2014-15 he co-organized the “Neoliberalism + Biopolitics” Working Group and Conference with UC Berkeley’s Program in Critical Theory, and in 2015-16 he was a DAAD Fellow at the Goethe University in Frankfurt and a Visiting Fellow at the Institute for Social Research. As an editorial board member of the journal Qui Parle he translated articles and edited a special issue on “Rethinking Sovereignty and Capitalism.” He is also co-editor of “Europe at a Crossroads,” the first issue of Zone Books’ Near Futures Online. His interests include the history of political thought, modern and contemporary Continental thought, critical social theory, political economy, and democratic and legal theory. His dissertation traces developments in twentieth-century social, political, and economic thought in order to interrogate and advance theories of political rationality in the study of neoliberal capitalism.