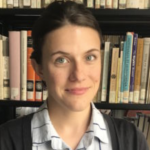 Wendi Bootes is a PhD candidate in the Department of Comparative Literature with a Designated Emphasis in Critical Theory. Her research and teaching spans Anglophone and Russian modernisms, the intersections of literature and philosophy, and the legacies of imperialism and revolution.

Her dissertation, “Revolutionary Perception: History and Modernist Form in Ireland and Russia,” considers the relationship between literary form and revolution in modernist prose during the early twentieth century. It asks how we perceive historical events—in particular, vast and complex phenomena such as imperial collapse and revolution. In addressing this question, this project argues that Irish and Russian writers turned to modes of linguistic and rhetorical indirection as a means of grasping the experience of revolution.