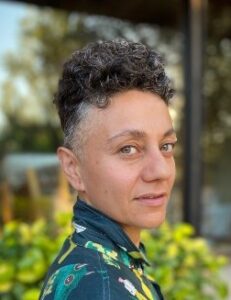 Sara Mameni is an art historian specializing in contemporary transnational art and visual culture in the Arab/Muslim world with an interdisciplinary research on racial discourse, transnational gender politics, militarism, oil cultures and extractive economies in West Asia. Mameni is currently completing their first book titled Crude: The Art of Living in the Terracene, that considers the emergence of the Anthropocene as a new geological era in relation to the concurrent declaration of the War on Terror in the early 2000s. Playing on the words “terror” and “terra,” Mameni proposes the term “Terracene” in order to think the planetary in conjunction with ongoing militarization of transnational regions under terror. Crude engages contemporary art and aesthetic productions, paying particular attention to artists navigating the geopolitics of petrocultures and climate change.

Mameni has published articles in Signs, Women & Performance, Al-Raida Journal, Fuse Magazine, Fillip Review and Canadian Art Journal. They have also written for exhibition catalogues in Dubai, Sharjah and Istanbul. Mameni was the curator of “Snail Fever,” at the Third Line Gallery in Dubai that explored art as a pandemic bringing together artists from the region whose works consider the embodied, viral and contaminating nature of sonic and visual aesthetics.