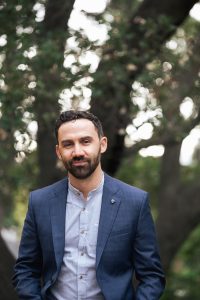 Ramsey McGlazer writes about twentieth-century European and Latin American literature, film, and critical theory. He works in Italian, English, Spanish, and Portuguese, with interests in poetry and poetics, politics and aesthetics, and feminist, queer, and psychoanalytic theory.

His first book, Old Schools: Modernism, Education, and the Critique of Progress (Fordham University Press, Lit Z Series, 2020), won the American Association for Italian Studies First Book Prize in 2021. The book identifies a “counter-progressive” strain in the work of cultural vanguards from Victorian Britain to 1970s Brazil. Old Schools shows how figures ranging from Walter Pater to James Joyce and from Pier Paolo Pasolini to Glauber Rocha return to and radically repurpose “the old school” that progressive educators wanted to leave behind. His new book project, “Free Clinics,” studies the politics of abolition and the literature, history, and ongoing afterlife of antipsychiatry (also known as radical, critical, or democratic psychiatry) in Italy and beyond.

McGlazer completed a Ph.D. in Comparative Literature and Critical Theory at UC Berkeley in 2015. Before returning to Berkeley, he taught at the University of St Andrews and was a postdoctoral fellow at the Pembroke Center for Teaching and Research on Women at Brown University. He is an Associate Editor of Critical Times and, with Lorenzo Fabbri, Coeditor of Italian Culture. He has also translated a range of critical essays and works of social, cultural, and psychoanalytic theory from Italian, Spanish, and Portuguese. These include Eduardo Grüner’s The Haitian Revolution: Capitalism, Slavery, and Counter-Modernity and, most recently, Rosaura Martínez Ruiz’s Eros: Beyond the Death Drive.