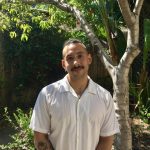 Pedro Javier Rolón Machado is a PhD candidate, poet, and sound artist from Caguas, Puerto Rico working within the Comparative Literature Department and the Designated Emphasis in Critical Theory at UC Berkeley. They hold a BA in Literature from Yale University (2014) and are interested in Francophone, Hispanophone, and Anglophone Caribbean and American poetry and poetics, postcolonial theory, Caribbean theory, sound studies, and aesthetics. Their doctoral dissertation, titled “Waves in Time: The Otherwise Poetry of Being Puerto Rican,” constellates artworks, literature, and other aesthetic materials from the Puerto Rican archipelago between the 19th century and the end of the 20th in order to track the development of radical imaginings of space, time, and sensuous experience emerging from maritime and oceanic figures. These artworks, which engage the vast body of saltwater that limits, surrounds, and conjoins the archipelago, map out the spatio-temporal dimensions of an elsewhere and an otherwise that in turn makes available a language regarding a Puerto Rican experience of sovereignty that is opaque to epistemological toolkits of history or political economy. Here, notions of permanence, endurance, and impermeability are no longer operative and erosion, decay, and death reorient the conditions and constraints for common life.

They have received support for their research from the Ford Foundation Predoctoral Fellowship and Philip Bret LGBT Studies Fellowship, and have presented their work at the Visual Cultures Working Group at the Latin American Studies Association, the International Consortium of Critical Theory Programs “Arts of Critique” symposium in Mexico City, and the Arts Research Center’s “Art as Critique” conference. They have appeared in various publications and presentations organized by academics in Puerto Rico and Argentina, such as the Latin American critical theory avenue Telar: Revista del Instituto Interdisciplinario de Estudios Latinoamericanos.