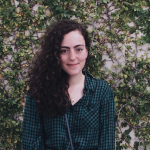 Lubna Safi is a PhD candidate in the Department of Middle Eastern Languages and Cultures with a Designated Emphasis in Critical Theory. She holds an MA in Comparative Literature from The Pennsylvania State University (2016), where she completed a thesis on the ways 20th century Spanish poets mobilized al-Andalus (Muslim Iberia) in order to negotiate Spain’s changing national, racial, and literary identities. Her current research interests include aesthetic experience, knowledge formation, reading praxis, and theories of vision and the imagination, with a focus on al-Andalus and the Maghrib.

Her dissertation, “How the Qaṣīdah Sees from al-Andalus to the Maghrib: Vision, Poetic Knowledge, and the Transformative Capacity of Poetry,” traces modalities of vision and visuality in literary and critical work from al-Andalus and 20th century Morocco. The dissertation examines vision—both poetic and physical—as an aesthetic and ethical praxis in the production, reception, and theorizing of poetry. Drawing upon readings in philosophy, poetics, optics, and critical theory, her project lingers on poetry’s transformative capacity as well as on the image and the imagination as they pertain to poetic knowledge.

Lubna has previously published in The Comparatist and has a version of her MA thesis forthcoming in Comparative Literature. She is also a translator and has served as an editor for the Journal of Associated Graduates in Near Eastern Studies.