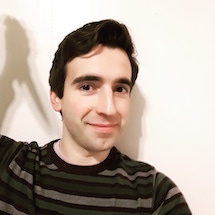 Chris is a PhD student in English, with Designated Emphases in Critical Theory and Renaissance and Early Modern Studies. Before coming to Berkeley, he studied at the University of Toronto and at Trinity College in his hometown of Dublin. He specializes in British and Irish literature of the “long” eighteenth century. His current research is focused on the early history of the novel in English and Marxist theories of primitive accumulation, as well as on trying to think what an aesthetics of “real abstraction” might look like with respect to these.