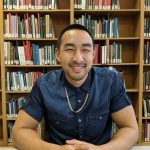 Brent Eng is a PhD candidate in the Department of Anthropology with a Designated Emphasis in Critical Theory. His particular interests include speculative philosophy, aesthetic theory, postcolonial studies, psychoanalysis, and political theology. Brent’s dissertation explores the nexus of individual and collective vicissitudes in the contemporary Levant through an ethnography of a bakery in Tripoli, Lebanon, at once at the margins of and central to ongoing destruction. Positioned against the backdrop of the Syrian war and the onset of the Lebanese revolution, it focuses both on the bakery as a singular privileged site and on the symbolism of the technique of bread making itself, where the former becomes a site of experimentation with possible life through the forms of the latter.