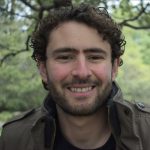 Alfonso Fierro is a PhD Candidate in the Department of Spanish and Portuguese, with a Designated Emphasis in Critical Theory. His research approaches critical urban studies through an exploration of utopian and speculative traditions of literature and architecture in Latin America. His dissertation “Inhabiting Utopia: Literature, Architecture, and Urban Utopianism in Postrevolutionary Mexico” explores the utopian urban models advanced by a line of radical avant-garde architects and writers in modern Mexico. The project examines how these architects and writers participated in urban debates and struggles of the period over issues such as affordable housing, rent exploitation, or demands for public services with a series of utopian visions for a revolutionary polis. In dialogue with contemporary critical theory, the dissertation explores questions of habitation, social reproduction, and speculative aesthetics that emerged in Mexico’s urban utopianism, as well as the avant-garde’s evolving theories on the political stakes behind the production of urban space and the critical role of art in imagining alternative futurities.

Alfonso is a regular contributor in the Mexican architecture and urbanism magazine Arquine. He has also published in different academic and non-academic magazines such as Public Books, Chasqui, Revista de la Universidad, and Discurso Visual. He coordinates a seminar on contemporary urban futures in the global south for Instituto17, a critical theory research institution based in Mexico. Alfonso is currently organizing and co-curating Hidden Cartographies, an exhibition on mail art networks in Latin America for the Museo de la Filatelia in Oaxaca, Mexico (September-December, 2021). At Berkeley, he teaches courses on Latin American, Spanish, and Latinx literature and art.