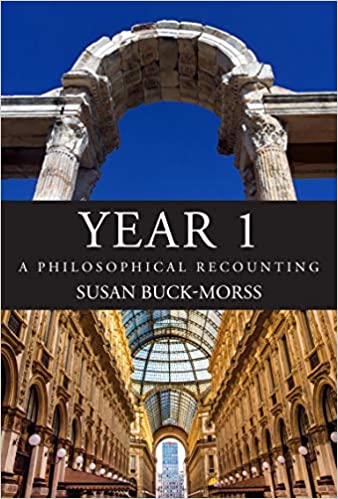 The book YEAR 1 (MIT Press, forthcoming 2021) is a project in the reconfiguration of knowledge. The focus is on the first century that starts the numerical count down to the present. All of the schemata of modernity – time, space, concepts and categories (as in Kant’s First Critique) – are put to the test of comprehending this alleged beginning, and none survives unscathed. The epistemological apparatus that modernity calls “history” was supposed to hold the past in place, in an order that leads to the present in coherent narrative form. But history writing itself provides knowledge that overturns this presumption, freeing the past to speak otherwise.

Susan Buck-Morss is Distinguished Professor of Political Science at the CUNY Graduate Center and professor emeritus of the Government Department at Cornell University. Her most recent book, Hegel, Haiti, and Universal History (University of Pittsburgh Press, 2009), won the Frantz Fanon Prize Book Prize in 2011. Her book, Thinking Past Terror: Islamism and Critical Theory on the Left (Verso, 2003), has been translated into Hebrew, Urdu, Spanish, Japanese, and Greek. She is also the author of Dreamworld and Catastrophe: The Passing of Mass Utopia in East and West (MIT Press, 2000), Dialectics of Seeing: Walter Benjamin and the Arcades Project (MIT Press, 1989) and The Origin of Negative Dialectics: Theodor W. Adorno, Walter Benjamin, and the Frankfurt School (Free Press, 1979). This talk is drawn from her new book manuscript, YEAR 1, to be published by MIT Press in winter 2021.