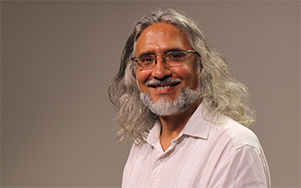 This talk is part of the Department of Rhetoric’s Spring Colloquium.

The concept of intensity is a keystone of process-oriented philosophies, including those of Bergson, Whitehead, Deleuze/Guattari, and Simondon, and often figures prominently in contemporary work classified under the label of affect theory. A currently widespread critique of the concept holds that it individualizes and interiorizes, in ways compromised, if not entirely tributary to, contemporary capitalism’s commodification of experience. This talk will delve into the concept of intensity, emphasizing its connection to the allied concepts of affirmation and immanence. It will be argued that intensity, resituated in its proper process-philosophical frame, is in fact a site of perpetual resistance to and collective escape form the quantifying captures at the core of capitalism’s dynamic, making a focus on it a necessary component of postcapitalist politics.

With Suzanne Guerlac, Professor of French, UC Berkeley, as Discussant.