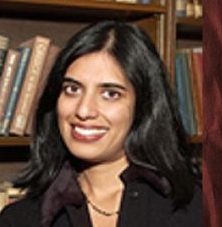 The theoretical project of world literature reorients reading in part through a scalar oscillation across the space-time fabric of literary history (old texts and new texts, familiar texts and unfamiliar texts, texts that traverse the locales of the national, the regional, the local, and the global). This talk explores the connections between world-scale concerns, particularly the legacies of racialized violence, and world-scale forms. The latter include world-systems and genres, both staples of world literature theory, but also encompass the forms of the affects and the shapes or scapes of memory. Exploring system, genre, affect, and memory as scalar units and nation, region, continent, and world as distinct sites, this talk models a reading practice for world literature.

Vilashini Cooppan is professor of literature at the University of California, Santa Cruz. She is the author of Worlds Within: National Narratives and Global Connections in Postcolonial Writing (2009). Her essays on postcolonial and world literatures, globalization theory, psychoanalysis, nationalism, memory studies, and affect theory have appeared in symploké, Comparative Literature Studies, Gramma, Concentric, PMLA, Qui Parle, and several edited volumes, including Trauma and Memory in the Contemporary South African Novel, The Routledge Companion to World Literature, The Cambridge Companion to the Novel, and The Cambridge Companion to World Literature.  She is completing a book titled The World at Large: Memoryscapes in World Literature.

This event is co-sponsored by the International Consortium of Critical Theory Programs with support from the Andrew W. Mellon Foundation and the Program in Critical Theory.