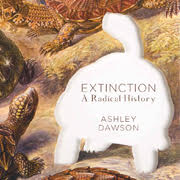 As other species are snuffed out, possible futures for humans look bleak. Can radical political transformation bring an end to the sixth mass extinction event? As some charismatic creatures are being saved in zoos, captive breeding facilities, and cryogenic banks, a multitude of others are disappearing as they are disregarded or actively targeted for destruction. How should we love in a time of extinction? What practices of care can keep those who we love in the world? This talk focuses on two cutting edge responses to defaunation: rewilding and regenesis. Exploring the political ecology of these new biopolitical practices of species conservation and revival, the talk engages in a skeptical critique of technological fixes to the extinction crisis.

Ashley Dawson is Professor of English at the City University of New York’s Graduate Center and at the College of Staten Island/CUNY. He is the author of Extinction: A Radical History (O/R Press, 2016), The Routledge Concise History of Twentieth-Century British Literature (2013) and Mongrel Nation: Diasporic Culture and the Making of Postcolonial Britain (Michigan, 2007). He is also co-editor of four essay collections: Against Apartheid: The Case for Boycotting Israeli Universities (Haymarket, 2015), Democracy, the State, and the Struggle for Global Justice (Routledge, 2009); Dangerous Professors: Academic Freedom and the National Security Campus (Michigan, 2009); and Exceptional State: Contemporary U.S. Culture and the New Imperialism (Duke, 2007). A former editor of Social Text Online and of the AAUP’s Journal of Academic Freedom, he is currently completing work on a book entitled Extreme City: Climate Change and the Urban Future for Verso.

To register for this session and receive a copy of the pre-circulated reading, please contact critical_theory@berkeley.edu.

Presented by the Animal Futures Working Group with support from the Department of English.