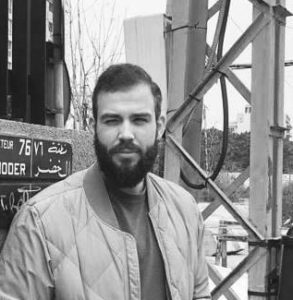 Aaron Eldridge is a Ph.D. candidate in the Department of Anthropology and the Program in Critical Theory at UC Berkeley. He holds a BA (University of Alberta) in anthropology and a M.Sc. (University of Oxford) in social anthropology. His work addresses Eastern Christian traditions, focusing on their post-colonial iterations in the Mediterranean through an emphasis on temporality, poetics, and the psyche. Supported by the Canadian Social Sciences and Humanities Research Council (SSHRC), his dissertation focuses on the return of Orthodox monasticism in contemporary Lebanon. The endurance of monastic life—from its weakened form during the civil war (1975-1990), to its vibrant return in the post-war period, to its staging in the time of the Syrian war and Lebanon’s economic and political antagonisms—evinces a temporality that cannot be easily captured within the paradigm of the nation-state or its crisis-time. This dissertation, as an ethnography of Orthodox Christianity in a time of destruction, lingers with the monastics’ dispossessive gesture of withdrawal (askēsis). Ascetic practices insist on the ambivalence of worldly destruction and its historical dialectics, which still yields the possibility of spiritual transformation and of divine disclosure (al-tajallī)..