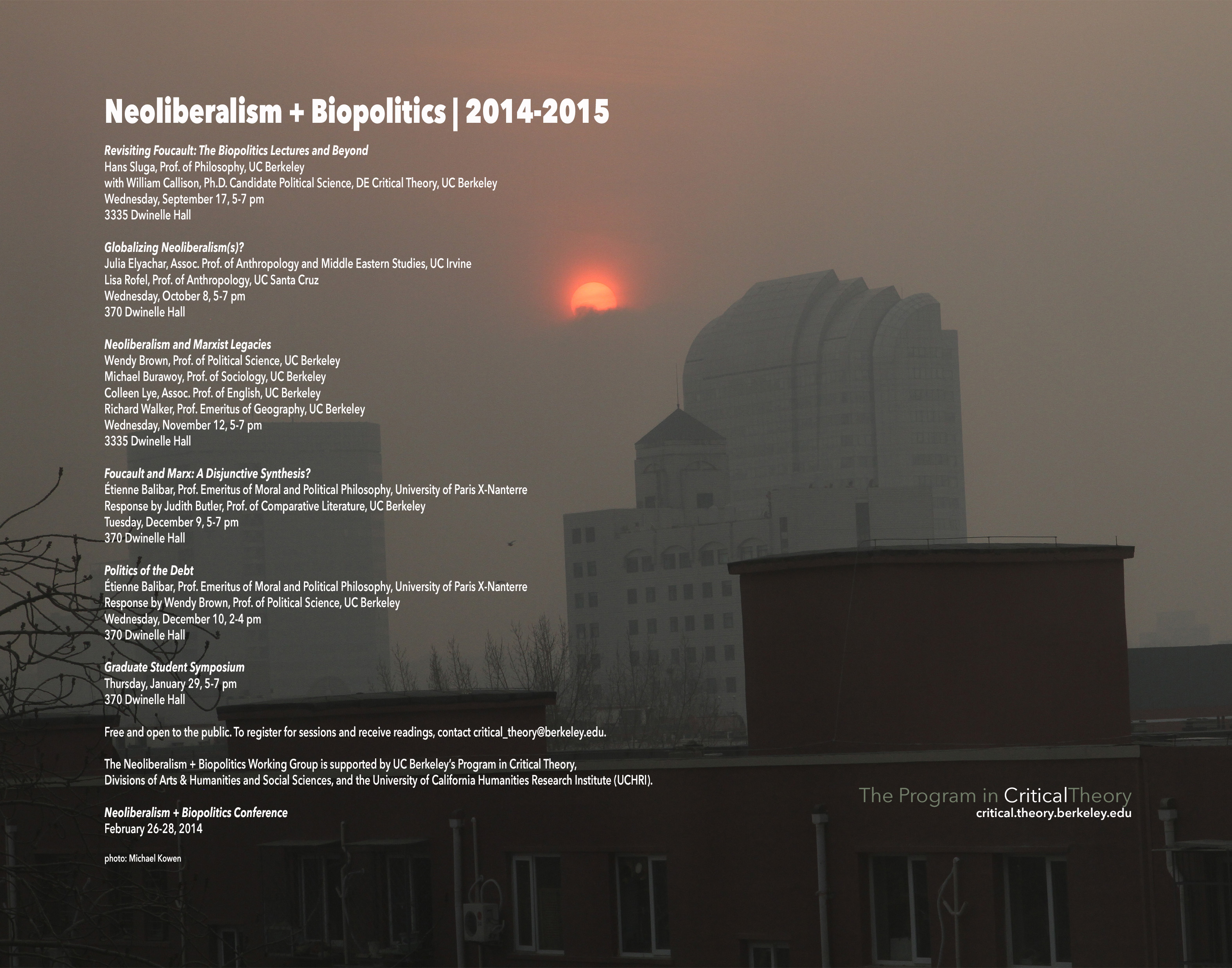 The Neoliberalism + Biopolitics Working Group is a semester-long series investigating the role of neoliberalism and biopolitics as both contemporary objects of study and paradigms of analysis for humanistic and social- scientific inquiry. While the two concepts were originally linked at both the historical and conceptual level by Michel Foucault’s 1978-79 Collège de France lectures, their contemporary usage extends far beyond this earlier articulation. Today, neoliberalism and biopolitics are increasingly deployed as conceptual tools to describe and evaluate new forms of political power, social control, technological developments, and economic orders. The proliferation of these terms, however, has also placed their enduring diagnostic value in doubt. This working group thus hopes to call these terms into question, refine their analytical precision, and test their explanatory potential against empirical investigations of contemporary social, political, and economic life. In particular, it hopes to interrogate the ways in which neoliberalism may function as a form of “biopolitics”—that is, the ways in which neoliberalism may develop and deploy new techniques of governance for the regulation and transformation of human life.

To this end, the Neoliberalism + Biopolitics Working Group explores diverse topics such as: the repercussions of and political responses to recent crises of finance capital; the dissemination of norms of “entrepreneurship” and “self-investment” in diverse geographic milieus; the relationship between neoliberal political rationalities and questions of citizenship, democracy, representation, and the rule of law; contemporary divisions of labor, debtor/creditor relationships, and mechanisms for market regulations (in particular with respect both to gender differences and the global south and north divide); and the development of new technologies for the regulation of biological life and manipulation of information flows. It also examines the legacies of different critical traditions for analyzing these topics, specifically, Marxist, post-Marxist, Foucauldian, psychoanalytic, feminist, and post-colonial traditions.

Sessions begin Wednesday, September 17 and are open to Critical Theory students and faculty, and other campus and public audiences. Meetings feature conversations on assigned readings and presentations by guest speakers including Étienne Balibar (University of Paris), Julia Elyachar (UC Irvine), and Lisa Rofel (UC Santa Cruz). The series culminates in a conference on February 26-28, 2015 that brings major scholars from diverse fields to discuss new research on these topics.

To register for working group sessions and to receive readings, please contact critical_theory@berkeley.edu.